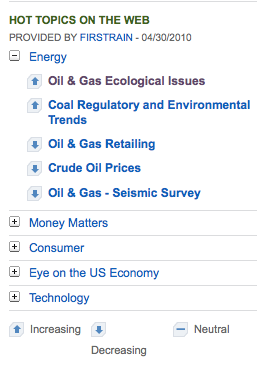 Winners and losers from the oil spill tragedy

There’s a great example of the impact of a rising trends on companies and regions on the stock research page of Fidelity.com today. You can get to this page here.

First look down on the right hand side – you can see the hot topics rising on the web. Not surprisingly Oil and Gas Ecological Issues is the hottest topic.

What you can now do is click through on the rising topic and see which companies are being impacted by it. Clearly BP and Transocean since they are being held accountable, but also the spill over (!) into positives for alternative energy sources like wind which will benefit companies like GE and Siemens. 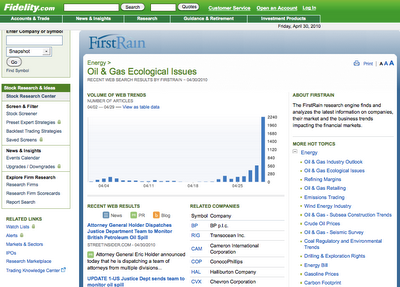 Scrolling down on the Fidelity.com research page you can see a long list of interesting articles to read which give you a good in-depth view of which companies are impacted most by the tragedy.

We find and analyze management for our customers. It’s one of the most popular things we do. So we know that helping users get a better, richer picture of who matters in the companies and markets they care about is valuable intelligence.

Jigsaw has a mixed reputation – from Michael Arrington of Techcrunch originally calling them evil in 2006, and then in 2009 just calling them amoral – to the New York Times describing them as driven by users self interest. They’ve been growing, but not like LinkedIn; revenue has been doubling, but was it enough to go it alone? But whatever you may think about their business model, and your “friends” revealing your contact information into a central database, the net result is more than 1.2 million members and more than 22 million contacts.

Salesforce has positioned this as entering the $3B data services market – and creating “new opportunities” to partner more closely with other data providers like D&B, Hoovers and Lexis Nexis. But I think this is a classic misdirect. I agree with Michael Maoz – what’s really going on here is the convergence in the needs of CRM and the social process.

Users want dynamic, current data. They know that today the most up-to-date information is on the web. It’s in networks, it’s in blogs, it’s living in the thousands of phoenixes (or should that be the correct Latin phoenices?) rising from the ashes of the breakdown of traditional journalism. They don’t want to get data from databases built from manual processes and filings – they are simply always out of date.

And so for Salesforce, the ability to pick up a dynamic contact list and the continuously updating process behind it (since we have to assume LinkedIn was not for sale) is a way for them to bring that dynamism into their CRM platform and into their moves into social media. It’s a smart move. But I do wonder what the long term impact is for the traditional, static databases. I know at FirstRain we are replacing Factiva today because our intelligence is richer, fresher (and easier, but that’s another story) – will Salesforce end up competing with Hoovers et al?

Trusting information from the internet is age independent

Matt Brown from Forrester shared a very interested survey result with me:

Forrester surveyed 2,000 US information workers last year, aged 18 to 64, and broke them into two groups for the analysis: GenX and Y (18-43) and Boomers (44-64) . And one area of interest was information workers ability to find what they need at work.

It’s encouraging that independent of age, at least between 18 and 64, there is no noticeable difference in people’s ability to find what they need at work. It means that the older demographic is not at a disadvantage even though desktop computing developed once they were already well into their careers.