If you had the chance to sell your tech company for a great price would you – or would you play the long game?

This is a decision successful entrepreneurs end up facing and is a question for some tech entrepreneurs right now as we go through what is arguably another bubble – and there are some very interesting cases to think about – and think what would you have done?

Consider the Huffington Post: A success story to most people – purchased by AOL for $315M in February at a 6.3X multiple of $50M in revenue and very small profits. The last investor, Oak Investment Partners, tripled their money in just over 2 years which is a great result for a late stage investment decision. And yet, as Jeff Bercovici of Forbes writes in his somewhat damning review of the HuffPo/AOL honeymoon, the difference in interests that can appear between investor and entrepreneur in very visible in this case.

Fred Harman, the Oak partner who made the HuffPo investment, told Forbes “Our goal was an IPO rather than building up the company to be acquired by another media company” and that he and the HuffPo CEO Eric Hippeau “were still inclined to roll forward as an independent company out of the belief that The Huffington Post could continue to rapidly scale and be the dominant social news company on the Web”. But for Arianna, AOL meant personal liquidity and a much larger stage and budget to build her dream with.

(full disclosure: my current company FirstRain is funded by Oak. They like to swing for the fences – as do I)

In contrast look at Zillow, which went public last week and, on 2010 revenue of $30.5M, now commands a valuation of greater than $1B. Is this valuation a surefire sign of a tech bubble? On Seeking Alpha screener.co writes that “The vast difference in valuation between a recent tech IPO and similar publicly traded competitors is not limited to Zillow” – Pandora’s valuation is almost as shocking as Zillow’s and outrageous in comparison to their comp RealNetworks. So long term public valuation (and so the team’s return) is at risk here.

In the enterprise social media space, Radian6 decided to sell to Salesforce instead of taking the long road. At a valuation of $326M and 10X revenue Techcrunch thinks SFDC overpaid but 10X trailing revenue is a terrific valuation for an enterprise software company and being integrated into Salesforce takes all the return risk out for the founders – plus SFDC smartly put additional options on as an earnout over 2 years (not unusual when a public company buys a private company and wants to keep the founders around). But also consider that maybe Salesforce creates a larger platform with deeper pockets for the Radian6 team to execute their vision on.

And waiting in the wings we have Groupon. They did not sell to Google last Fall for $6B and, if they can get over the questions about their business model and profitability, hope to IPO for $20B – and are lining up enough banks to make it happen.

All this leads to questions of timing – are today’s valuations fashion driven because tech IPOs are hot now? – and what would you do if it was you? I’ve been there, it’s a gut-wrenching decision.

If you sell:
+ You get secured liquidity and wealth for you and your team (especially if you are bought for cash)
+ You play on a larger stage, often with a larger budget
+ You may get access to many more customers on a larger platform
+ You create long term job security for your core tech team
- You lose final authority on strategy and budget
- Many members of your team (non tech) may lose their jobs
- You lose the essential joy of building your own venture

If you go public:
+ You get significant capital to grow your business with
+ You stay in charge (for now…)
+ Your investors get a great return in 6 months (after the lockup comes off)
+ You may get a significantly higher return over a longer time period
+ You continue to drive the strategy and M&A to execute you and your team’s vision
- Limited liquidity for you or your team for the foreseeable future
- You are running a public company (no picnic!)
- Your return is not secure, you are subject to volatile markets

… and there are many more pros and cons…

One of the best pieces of advice I got was to, in the end, focus on how my management team is successful and makes money from their hard work. Not my ego or my net worth. Not my investor’s return. My team, the ones who built the company with me. If they make money, everyone else will make enough.

Another Big Step Forward for Both FirstRain and our Customers

One of the most rewarding aspects of being a CEO is when you can see the hard work put in by you and your team really paying off.

For the last several weeks, everyone here at FirstRain has been putting in long hours in order to launch the next phase of FirstRain intelligence solutions to market, and so now I am extremely delighted to announce the release of the third generation of the FirstRain Web Application and our new FirstRain mobile apps for iPhone and Android (now available in the iTunes App Store and the Android Marketplace) today.

This important new release represents the third major step forward in FirstRain solution development, and provides our customers a truly unique and effective, role-based way of monitoring the critical developments impacting their business, industry, customers or competitors. In addition to these workflow enhancements and the new mobile apps, we’ve also now optimized FirstRain for use on tablet devices, all of which means that critical business intelligence can now be delivered to any place or time our customers most need to see it: whether it’s over their morning coffee, at their desk, on their company portal or out on the road.

The product also has also had a bit of a make-over, with a fresh-new look and a streamlined design which our non-professional-searcher customers will find even easier to navigate—making it simple to get in, find what you need, and get on with your work.

All in all, we think it’s a big step forward in an already great product, and seeing this really sharp new iteration of FirstRain come to life has been extremely gratifying for me and everyone involved. And for all of you who are FirstRain customers, try out the new role-based monitor setup, download the new mobile apps, and please, let us know what you think!

FirstRain team at the Cupertino Splash and Dash last night

Perfect, beautiful Cupertino evening last night. A few of us competed in the July Splash and Dash in the Stevens Creek Reservoir – a 1 mile swim and 3 mile run which is just the right distance to make you feel great! Aaron and Cory did both the swim and the run, Thomas ran in relay to my swim, and Doug completed the swim and decided he’d wait until next time to do the run….

I am a big believer that competing in sporting events is a great way to build teams and it’s something we do well together at FirstRain, especially within the sales team. We started with everyone participating in some way at the Aquabike in 2008 and now we not only compete in a couple of events a year together, we also train together, and eat and drink together! 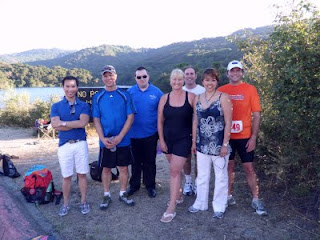 Because the reservoir is only a couple of miles from my house we joined up with supporters, spouses and several kids at my house for a bar-be-que. The kids — and one of our dogs — spent the whole time in the pool and I gather everyone under age 10 slept like a log last night! 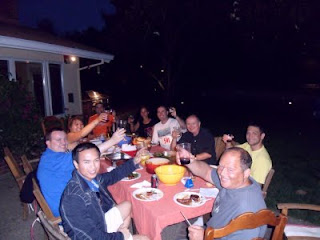