Apple, iPad and Accelerating Growth in the Enterprise | FirstRain

The most exciting development in the Enterprise today is not, as Salesforce and Jive would have you believe, “social networking for business” but the not-so-stealthy explosion of the iPad as a productivity tool.

We see dramatic deployments every day, especially into the enterprise sales and customer marketing teams which are the teams we work with most often. Eric Lal of ZDNet keeps a site updated with iPad pilots — often documenting large company decisions we have already seen on the ground — thousands at a time!

Even big blue IBM may now have one of the largest Apple and iPad deployments in the world. As an Apple fan it’s terrific to see the corporate world finally seeing the light. Even my own R&D team (for a long time PC-based nerds) are adopting a mix of Apple in with their PCs, iPads (of course for development) and iPhones in with Android phones (which after all you can hack and play with so much more easily than an iPhone).

I also agree with Peter O’Neill at Forrester that many market researchers are falling behind in their methodology and not including broad enough sources of corporate deployment. They have a PC bias and may be missing the rapid growth of BYOD (bring-your-own-device) policies at companies large and small. BYOD is not only popular but in the end it’s cheaper. Cisco pioneered this policy 5 years ago, showing that it was, in the end, cheaper for IT to support. And while IT departments still worry about data security, I was convinced this was solved the day my Symantec customer told me in 2011 that he could now work officially work on the iPad (Symantec is the most paranoid company on security – appropriately so given that it’s their business).

There are two major waves happening for enterprise sales teams right now: social collaboration (yes I don’t think Salesforce and Jive are wrong) and the iPad. And the FirstRain customer intelligence system is right at the intersection of the two – with our sizzling hot iPad app and integration into the top collaboration portals. We have customers deploying in all of them: Jive, Salesforce, Microsoft and Quad (Cisco) and in every case enterprise sales reps also have iPads (either their own or company issue) so they can stay on top of their major customers wherever they are. 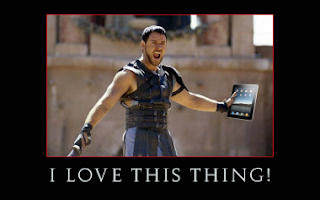 And I hope I never have to use a PC again… although this is a false hope since my husband is the lone hold out in our family because he is an electronics designer and needs the high end tools which will probably never be on Apple (sigh).