Note: This post was originally posted on my personal blog “Chitchating about Information Delivery” on June 11th, 2012

Last night, the TV was on- only the dog was watching, but as i walked by i noticed this: 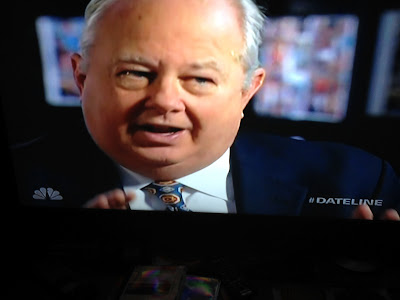 On Dateline NBC, the ubiquitous peacock on the left side of the screen and #DATELINE the Twitter hashtag on the other. I have seen #hashtags on many a commercial, news show etc. and often even within TV shows, the Tweet this with #hashtag bla bla bla – but haven’t really seen it being used as part of the brand name of a show so blatanly (ok i admit i don’t watch much real-time TV, so correct me if i am wrong!).

It reminded me of a blog post I read a while ago about Facebook, where the author made what i thought at the time was a very astute point about the following URL- www.facebook.com/nike . Why would Nike who has one of the most recognized brands in the world be willing to supersede their branding with facebook’s? Had facebook ubiquitously become the brand identifier for big brands? I couldn’t find that post or the author as i wrote this, but i think it went on to talk about how Facebook was going to be the defacto platform.

Now, most of us when we think about hashtags think about Twitter- no doubt #hashtag adoption started becoming mainstream with Twitter. The # symbol, called a hashtag, is typically used to mark a keyword or topic in a Tweet. Any user can categorize or create hashtags or follow and search topics using Twitter or various services built on top of Twitter. I remember seeing #hashtags start in August 2007 and becoming excited about the power they could have in information delivery and consumption.

But hashtags are used in many other applications, take for example Enterprise Social Networks (ESNs) like Yammer or Salesforce’s Chatter- that encourage the use of the #hashtags for classification, to find other people talking about specific topics, to display the ‘categorized’ content within one view etc.

If you have been reading my blog for a while, then you know i have been talking about ‘tagging’ for a while and even wrote a very popular ebook on the subject. Hashtags are just an extension of tagging, but the conversations that occur around them make them way more valuable then traditional tags- that were mostly consumed by search engines.

So this morning, i was reading this TechCrunch article on Twitter’s new Brand pages, that launched with #NASCAR. Since #hashtags were on my brain with the #DATELINE revelation i had last night- i thought it was very timely since i have had a #hashtag post coming anyway.

From the Twitter Blog, you can learn a bit more about how these Brand pages are created. In describing how the Pocono 400 race was covered through #NASCAR it states “Throughout the weekend – but especially during the race – a combination of algorithms and curation will surface the most interesting Tweets to bring you closer to all of the action happening around the track, from the garage to the victory lane.” –

It will be interesting to learn more about how Twitter is creating these Brand pages, what control will the brands themselves will have (are they the curators or is Twitter??), how will the algorithms work? Are they automatically removing tweets that would be brand offensive?, how valuable it will be to consumers, how long before people start to ‘game’ the system and how will Twitter combat that- and ultimately how else  will #HASHTAGS create new consumption and interaction models for content inside and outside of Twitter?