In keeping with the FirstRain culture of us competing as teams in athletic races – November 1st the FirstRain Gurgaon team took part in the Airtel Delhi Great Run & Half Marathon, along with 30,000 other runners.

The turnout of our team was fabulous, with 28 Rainmakers participating running, including David Cooke from our California office (the pale face in the blue hat below). Everyone met in a huge holding area prior to the run and the atmosphere was festive and exciting. 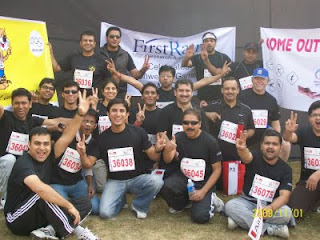 The run was organized to allow serious runners, teams and revelers alike the same opportunity to make the most of the day. Abhinandan and Ansuman wanted to see how fast they could run the course and so they worked their way to the front of the waiting starters.

Many of the runners were part of corporate teams or clubs, running with banners for their companies or for a common cause they were supporting. There was a sea of banners all around.

Once on the course the Rainmakers ran as a team. 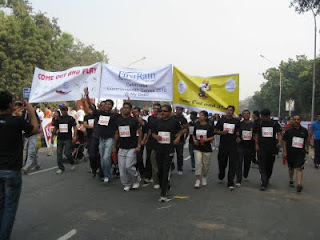 Our banner was for FirstRain but also celebrated Delhi hosting the Commonwealth Games in 2010 which is a very exciting opportunity for the city. 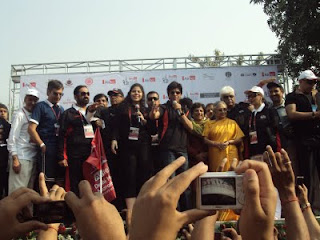 As the team got to the start line to show our banners off to the various watching celebrities, Shah Rukh Khan (a HUGE movie star in India) appeared, and the mass of runners turned into a frenzy of excitement. The procession of runners stopped for several minutes. 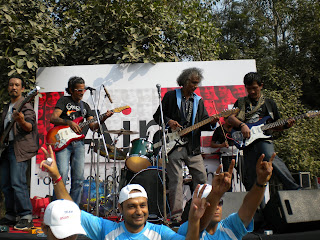 As we ran local bands also provided fun entertainment and encouragement, as did the famous Kingfisher girls. 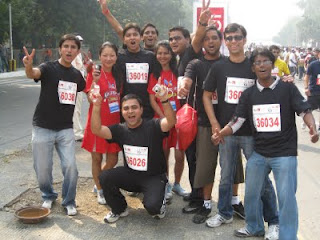 Great fun was had by all. The competing team felt that it was wonderful to be part of the team at such a lively, vibrant and health oriented event.

It was a first time out for many. Even so at the finish line there was heard talk that several may graduate to the half marathon next year.

Way to go Rainmakers – I am proud of you!

n.b. Cory from our New York office ran the full New York marathon on Sunday and we are all very proud of him too (and were supporting him as he limped around the office with ice on his knee on Monday)