We have a history of taking on whacky athletic challenges at FirstRain – both to get and stay fit and also to play together as a team.

Yesterday was no exception, although we were a small team this time. Three of us competed in the Splash and Dash in the Stevens Creek Reservoir in Cupertino CA. It was supposed to be a 1.2 mile swim and 3 mile run.

Well, it turned out a little different than we had expected. First off the water was really cold – which meant we were gasping for the first leg as we got accustomed to the temperature. And then the swim was not 1.2 miles – it was closer to 1.6-1.7 miles. We only knew this because it took me so much longer than last time I did it and so we asked around some of the more experienced competitors who estimated the distance for us based on their swim times.

It’s no wonder that at the end we didn’t run. We’d had enough. But we enjoyed it, we didn’t come last, and we are signed up for two more races this year!

Here we are before the race (we didn’t look as good afterwards!) 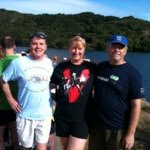 Eugene, me and David
You can see some of our other events here: The 2008 Vineman Aquabike, The 2009 San Jose Rock n Roll Half Marathon and The 2009 Great Delhi Run.