On the eve of the rumored Apple tablet announcement, after Apple has just announced the best quarter ever, it’s interesting to look at how we stay on top of a hot topic like Apple rumors.

FirstRain has a topic called “Apple Rumors” because there is an abundance of chatter on the Web trying to answer the question “What’s next for Apple?” and it takes our ranking algorithms to pull out just the interesting stuff and remove the junk, duplication and noise.

The topic works particularly well since we crawl many of the sources of chatter for the company, which include 100s of blogs worldwide that seem to only discuss Apple’s future products. Anyone who has ever followed the blog the Boy Genius Report would know the valuable insight that select bloggers can provide. To reduce the noise on the Web, FirstRain uses a proprietary system to rank blogs in terms of authoritativeness and content quality.

This is how this topic is reported within FirstRain – and you can set up a saved search that will push the ranked web results to you in RSS or email. 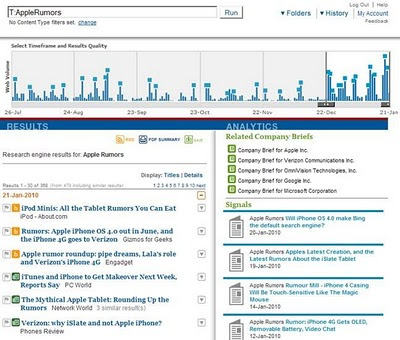 In one quick summary using our signals on the right hand side or in the chart, you can see the rumors that may be interesting to follow up with additional research. Or, if you’re about to step into a meeting with Apple or listen to their conference call, the rumors could provide you with ideas for questions of the team.

And you’ll notice what appears to be a possible June launch date for a Verizon iPhone, which has been speculated about for quite some time.

Note – Apple does try to shut down rumors too – as when they sued Think Secret and got it to shut down because it seemed to have too much inside information.